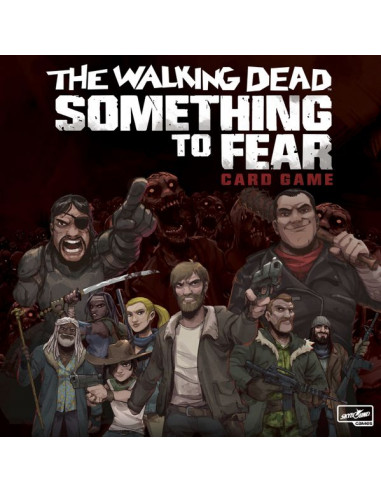 The Walking Dead: Something to Fear

The Walking Dead: Something to Fear is a simultaneous card selection game with variable powers for 2-6 players and uneasy partnerships. Players must outwit their frenemies in order to acquire the best sets of cards to win the game, but if players aren't careful, the group will be overwhelmed and everyone will lose. In The Walking Dead: Something to Fear, players attempt to survive nine waves of walkers and brutal villains while collecting supplies and weapons in the post-apocalyptic world of Skybound’s acclaimed series, The Walking Dead.

Each round, players secretly play 1 card from their hand facedown. All cards are simultaneously revealed to determine round turn order, and ability resolution(s). Players use iconic characters to secure sets of cards in an attempt to survive the harsh conditions the groups face. At the end of each round, 1 card will escape the group and deal an amount of damage to all players at the end of the game.

Players must manage 20 collective group health, and if all players survive, the player with the highest set collection score wins! If the group takes 20 or more damage at the end of the game, all players lose.

Do you have what it takes to survive?