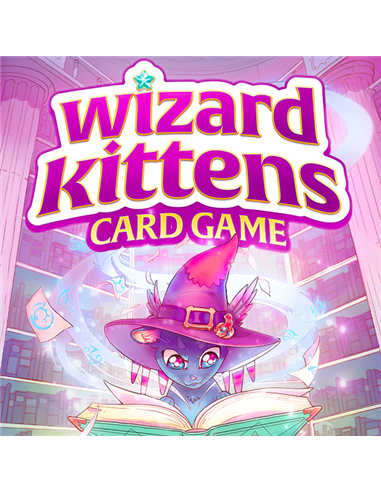 Wizard Kittens is a semi-cooperative set collection card game. Players are wizard kittens who have accidentally released a few curses from the library's restricted section. Now they must defeat the curses before they're caught by the librarian, Professor Whispurr.

Each turn plays quickly but offers interesting decisions, most often around which spell to use and how to use it. Spells allow kittens to draw extra cards, sling cards at other players, discard cards out of their own play areas, or trade any two cards in play. No player can use the same spell two turns in a row, either.

The game ends when either the last of the six curses is defeated, or when the Professor Whispurr card is drawn from the ritual component deck. If the kittens defeated the last curse, then they tally up points (including a secret objective Extra Credit card), and the highest score wins. If they are caught by Professor Whispurr, then the Cleanest Paws Clause applies. All kittens with 10 or more points lose, and from those who are left, the kitten with the fewest cards in their play area wins.