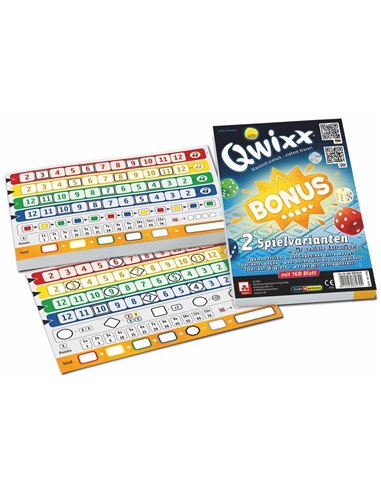 On one of the scorepads, the score sheet now includes twelve boxed spaces, with three boxes in each of the colored rows. Additionally, a row of twelve colored boxes lies below the colored rows. Whenever you cross off a boxed space, you cross off the next colored box in the row (e.g., a red box), then cross off the leftmost space of that color that you can legally mark off. This might cause a chain reaction, and it might cause you to complete a second row, which would then end the game.

On the other scorepad, ten spaces among the colored rows are marked with bonus boxes, with two each of five bonuses. When you mark off the second box of a particular bonus, you receive a special reward, such as crossing off the next two spaces of your row with the fewest marks, crossing off the next space of each active color, or doubling the score of your least valuable row at the end of the game.