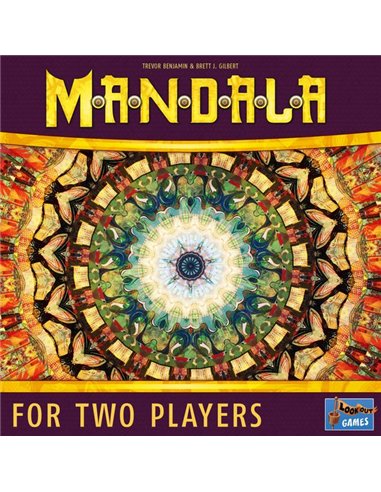 The Mandala: the symbol of an ancient and sacred ritual. Colored sand is laid to create a symbolic map of the world before the pattern is ceremonially destroyed and the sand cast into the river.

In the two-player game Mandala, you are trying to score more than your opponent by collecting valuable cards — but you won't know which cards are valuable until well into the game! Over the course of the game, players play their colored cards into the two mandalas, building the central shared mountains and laying cards into their own fields. As soon as a mandala has all six colors, the players take turns choosing the colors in the mountain and adding those cards to their "river" and "cup". At the end of the game, the cards in your cup are worth points based on the position of their colors in that player's river. The player whose cup is worth more points wins.

The linen playmat shows two circular mandalas, with each being divided by a horizontal space (the mountain) to create one "field" for each player. The playmat has seven spaces in front of each player to hold their river of single face-up cards and their cup: the stack of face-down cards which they score at the end of the game.

A mandala is completed once it contains all six colors of cards. When this happens, the players "destroy" the mandala, taking turns to choose a color present in the mountain and claim all cards of that color. Whoever played more cards in their field chooses first; if tied, the player who did not complete the mandala chooses first. The first time you claim cards of a specific color, lay one of these cards in the lowest-valued empty space in your river, then place the rest into your cup. The spaces in your river are valued 1-6 in order, so cards of the first color you claim will be worth 1 point each, cards of the second color you claim worth 2 points each, and so on.

Once a mandala has been destroyed and all the colors in the mountain claimed, cards played in the fields are discarded, two new cards are dealt face up into the mountain, and the game continues.

The end of the game is triggered either when the deck is exhausted or when one player adds a sixth color to their river. Both players then tally the value of all the cards in their cup, based on the position of the colors in their river, and whoever has the higher score wins! 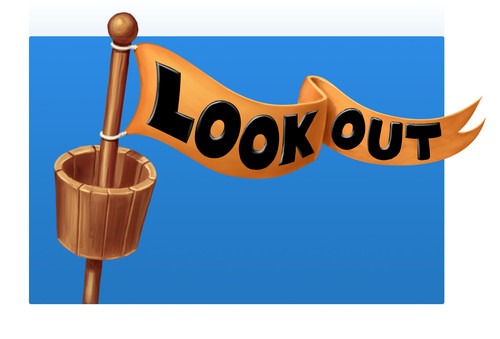