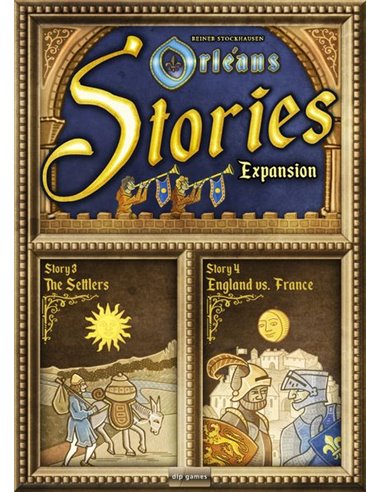 In the third story, "The Settlers", you go back to the beginnings of the settlement around Orléans. The hard-working farmers gradually expand their settlements with the help of old acquaintances such as craftsmen, monks, and scholars, and they have to face only minor skirmishes, which affect their otherwise quiet life a little. A story for all those who love the quiet construction without big disturbances from outside.

The fourth story, "England vs. France", differs quite a bit from the previous one: The age-old feud between these two countries serves as a basis for the clashes between the teams. Exactly four players are involved, two of them playing for France, the other two for England.

But who is who? This secret is revealed only in the course of the game, and often the surprise is big because one had bet on another competitor. Now it is time to quickly complete the common task and hope that the secret messages will also contribute to the victory in order to triumph in the end.