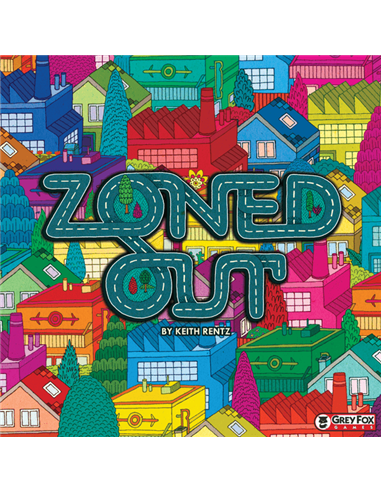 In Zoned Out, you take on the role of a developer trying to build a thriving metropolis from the ground up. To win, players will need to use the right combination of residential, commercial and industrial development as well as downtown construction to gain the most points.

On their turn, a player selects one of the square city cards from their hand and adds it to the city, overlapping at least one existing square. They must then move their planner to one of the four squares of the new card. If they left the zone they were previously in, they will score points for the size of that zone with additional bonuses for connected parks and mansions and penalties for connected parking lots and abandoned houses. Zoning out also helps build one of the city's four downtown towers, which award points at the end of the game based on who contributed to each of them the most.

Mastering Zoned Out takes good timing and clever card placement. In the game's advanced mode, players will also be competing to earn points from a variety of public and private objectives for the city.