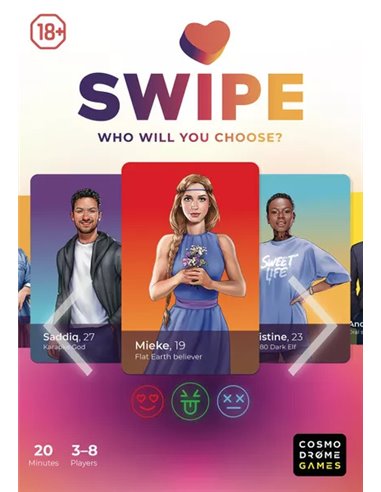 Dating apps are full of unknown people, and until we get to know them better, we have stereotypical thinking, right? How can you choose a person, having only their appearance and just a little bit of info about personality? Imagine there is a fragile charming girl and a handsome athlete guy in front of you — which of them looks so reliable that you would take him or her with you to the ISS? What if the girl spoils the series but is a jack-of-all-trades, and the guy is the passive-aggressive mom's friend's son? What will you do: swipe right or ignore?

Swipe is a party game with extremely simple rules. At the start of a round, one player becomes the leader and closes their eyes. Another player draws two character cards from the deck and places them in slots 1 and 2 in the plastic organizer to make them easy to see, then draws an action card from the deck and places it between these characters. Each player other than the leader receives a goal card that shows either 1 or 2 — and your job is to make the leader pick that character so that you score 1 point.

On your turn, give characters trait cards — whether positive or negative — by playing them from your hand. The leader then chooses the character to whom they will apply the action drawn at the beginning of the round: to kill, to marry, to have sex with, etc. All the players whose character was chosen receive 1 point.

Whoever has the most points at the end of the game wins. 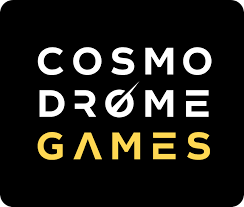