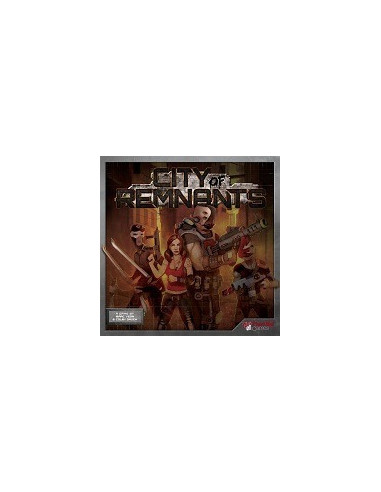 Hot rain falls down upon a cold, rotting city. Here the Yugai, a species of militant humanoids, leave the survivors of the worlds they have ransacked and destroyed. It is a prison and a work camp, a place for those who lived through Yugai invasion to live out their remaining years as slaves. This is Gatorum, the City of Remnants.

In City of Remnants, players take on the roles of gang leaders, each one with unique qualities and motivations. Players will struggle to control the city, but only the winner can decide the city's future. Many paths to victory lie before you. Bid for gang members who provide a variety of shady skills. Get an edge with weapons and other sundries from the black market. Build districts that can provide you with advantages, production and income, but beware because a greedy opponent might sweep in and take over the work of your own hands.

City of Remnants combines strong resource management, auction, and conversion mechanisms with spatial tactics, assymetric player powers, area control and direct conflict. A variety of tools, different every game, are at your disposal to build up your gang and claim the city for yourself. But watch out for the Yugai police force, who will meddle with everyone's plans!