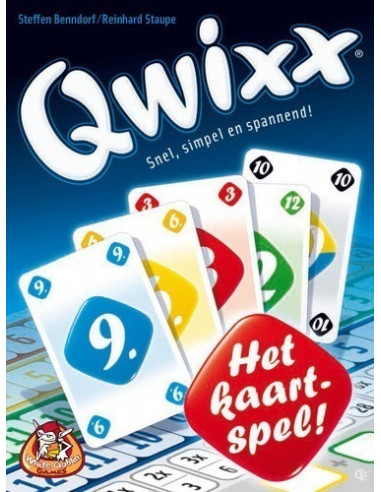 Qwixx: Das Kartenspiel captures the spirit of Qwixx — with players still trying to cross off numbers in four colored rows as best they can — but this game uses cards instead of dice, allowing for more tactics and planning as you draft and play a hand of cards.

As in the original game, in Qwixx: Das Kartenspiel each player has a scoresheet with the numbers 2-12 in rows of red and yellow and the numbers 12-2 in rows of green and blue. You want to mark off as many numbers as possible, but you can mark off a number only if it's to the right of all marked off numbers in the same row. The deck has 44 cards, eleven in each color numbered 2-12; the back of each card shows the number but without the color. Each player starts with a hand of four cards, and four other cards are laid out face-down — that is, with the color hidden — in a row beside the remaining deck of cards.

On a turn, a player fills her hand to five cards by drawing from the four cards on display, then refills the card display from the deck. Using the number now visible on the top card of the deck, each player can choose to cross off one instance of this number in one row on her scoresheet. The active player then plays 1-3 cards from her hand, all of which must be the same color. She can cross off the numbers on these cards — but only if at most one number is missing in the series of numbers to be crossed off. For example, if she discards 2, 3 and 5 in blue, she can cross off these three numbers (assuming that she hasn't crossed off any blue numbers previously); if she discards 2, 3, and 6 in blue, then she can cross off the 2, the 3, the 2 and 3, or the 6.

If a player has crossed off five numbers in a color, then she can cross off the rightmost number (2 or 12) should the opportunity arise; if she does, she also crosses off a lock token in this color. If the active player can't cross off a number during her turn, she must mark a penalty box.

When a player has "locked" two colors on her scoresheet or marked off four penalty boxes, the game ends. Each player tallies her score in each color — the more numbers crossed off, the more you score — then sums these totals and subtracts any penalty points. Whoever scores the most points wins!

For a variant, Qwixx: Das Kartenspiel includes eleven multicolored joker cards, also numbered 2-12, that are shuffled into the deck. A player determines the color of this card only when playing it on her turn.